A Peek at our Sleek New Teak 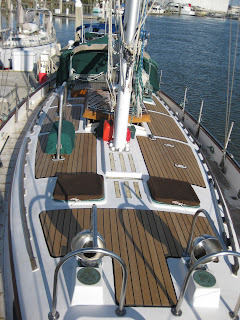 Moitessier is finally starting to look like a boat again (at least temporarily).  With the weather the way it was this time of year down here, Frank finally convinced me to let him start our deck project.  The fiberglass on the cabin tops had finally come down in moisture content low enough for us to feel comfortable going forward with the project.  Initially, we had planned on glassing over the inset panels and applying a nonskid finish, this made sense until we did a little more research.  Because the panels were inset a 1/4", the cost for the materials to glass it in turned out to be way more than we had originally anticipated.  The cost coupled with Frank's lack of experience with glasswork caused us to rethink our options and at least look at teak as a possibility.  After calling around to a bunch of lumber yards, we quickly realized that we needed to look elsewhere if we were to do it for a reasonable price.  We decided to get in touch with a teak deck installer in the hopes of purchasing their offcuts, and after talking with the guy about our situation, life story, etc, he agreed to let us come look through a pile of the rejects. The company itself, The Teak Hut, specializes in prefab decking for multi-million dollar yachts and their "rejects" turned out to be just what we were looking for.  The boards had a variety of flaws which included a slight sweep to the grain, darker mineral deposits, pin-sized wormholes, or boards that were just too short.  These flaws were barely noticeable to our unsophisticated eyes, and to us, they were downright gorgeous, especially at $2.50 a linear ft!   Hard to believe that people would get their panties in a bunch over such minor defects.  Working with The Teak Hut was simply a pleasure.  Roberto, the representative we worked with, was extremely helpful and proactive about getting us what we wanted.  When we arrived at the facility, he took the time out to give us a tour of their operations, allowed us to pick and choose the boards we wanted out of the reject pile, and even managed to get us a couple of "scratch and dent" boxes of fitting epoxy at a discounted price.  We also spoke with a technician (can't remember his name now) that was able to give us some professional advice on how to best go about this project.

Being as frugal as we are, we tackled the ordering of the wood in the most precise way possible.  We started by making paper templates of each one of the panels to be laid with teak.  We then drew and measured out all the boards and meticulously listed the boards from longest to shortest.  This was very time consuming, but because of this, we were able to figure out the EXACT linear footage we needed for the project and were able to greatly minimize our wastage.   When we got the boards home, we measured and catalogued them by size.  We then took the first list and played puzzle maker.  For example, a 62" board would give us 2 10s", a 12", and a 30".  We did this until every board was accounted for.  All in all, believe it or not, our total wastage could fit into a gallon sized ziploc, less than 5 linear ft total, not bad considering we were working with 474.66 linear feet cut into 136 boards!

After all this was done, we had 2 lists.  One was our lumber inventory, which accounted for each board and the lengths that would come out of that board.  The second list was the list of panels and their required lengths.   From this, we were able to pull the boards required, cut them their specific lengths, and shape them to fit the space.  We used 5mm spacers (which The Teak Hut gave us) for our caulking seams.  We covered with clear packing tape so they wouldn't get stuck in the epoxy during final glue down.  The boards were cut and shaped using a jigsaw, a miter saw, and a random orbit sander for the radii, and Frank cut cardboard into templates for some of the more complex shapes.  It took a little less than a day per panel. 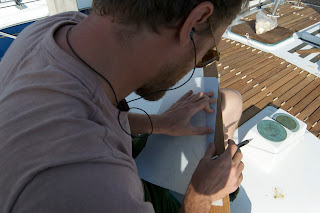 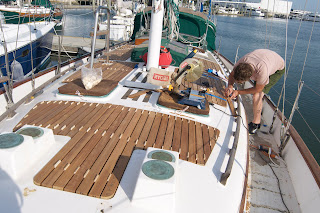 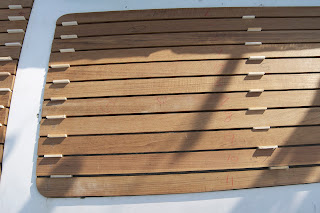 After all the boards were cut, fitted, numbered and labeled, it was time for glue down. (Note: Numbering and labeling turned out to be very important as it made laying out of the boards very straight forward which is important especially when racing epoxy cure times).  We sanded fair the topsides of each panel, cleaned the panels and the boards with acetone, and laid down a 6 oz layer of fiberglass cloth to prevent the previously epoxy filled screw-holes from ever migrating out or taking on water.  As the West System epoxy started to kick and became tacky, we then laid on the Teak Deck Systems Fitting Epoxy (very hard stuff to work with, the consistency is comparable to really sticky, thick taffy) so as to create a chemical bond between the two.  We used a Spackling trowel to make sure that the fitting epoxy was evenly spread. We held down the boards using various bags of anchor chain, and let the epoxy cure overnight.  After this, we popped out the spacers, and taped out the outer edges of the panels to create a clean outer seam, and caulked using a borrowed electric caulking gun (this tool was the biggest lifesaver of all!) and Teak Deck Systems SIS 440.  After the caulk was cured in another 24 hours, it was simply a matter of sanding the panel smooth with the random orbit sander and some 50 grit sandpaper. 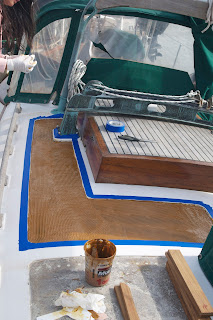 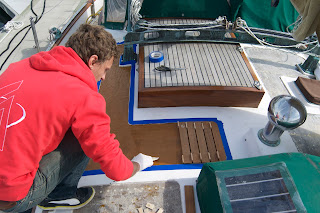 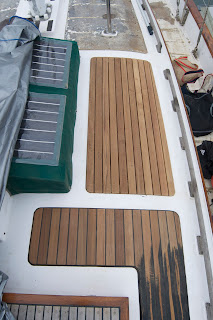 At the end of the day, we ended up using 480 linear ft of teak, 34 tubes of caulk, 1 3/4 gallons of fitting epoxy, a roll of packing tape, 400 5mm spacers, 4 rolls of painters tape, a package of razor blades, a package of dixie cups, 2 packages of popsicle sticks (for stirring), 7 measuring cups for the fitting epoxy, 11 yards of 38" 6oz fiberglass cloth, 8 rolls of paper towels, 100 pairs of latex gloves, 3 trowels, 20 sanding discs, 30 sheets of notebook paper, and a partridge in a pear tree.  This cost about $2600 in materials, about 78 hours of actual labor, and 25 hours of prep work (including calculations and organizing) over the course of a month and a half due to working around weather windows. The quotes we researched ranged between $15K-$20K for this job had we hired it out, so doing it yourself and buying the rejects is definitely the way to go, and to be honest, it really wasn't that hard compared to other jobs on a boat.

The biggest lesson we learned from all of this is that preparation really goes a long way in determining the quality of the finished product.  All in all, start to finish it was one of our smoothest endeavors thus far.  We are extremely pleased with the results as it transformed the look of Moitessier from being a derelic to now just being a boat that needs the side decks done (cosmetically, that is), which we are now looking forward to tackling (those will stay nonskid as originally planned).  It's always rewarding to do jobs that you can physically see the end result. 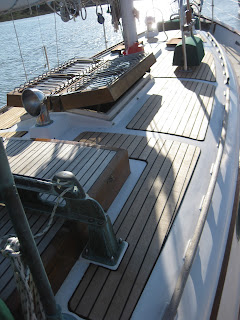 Yu and Frank
Originally from NY we are now living aboard our 1985 Hans Christian 41 cutter, Moitessier, that is nolonger in St. Augustine FL!! 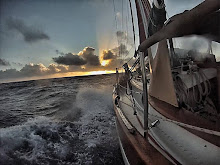 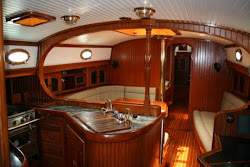